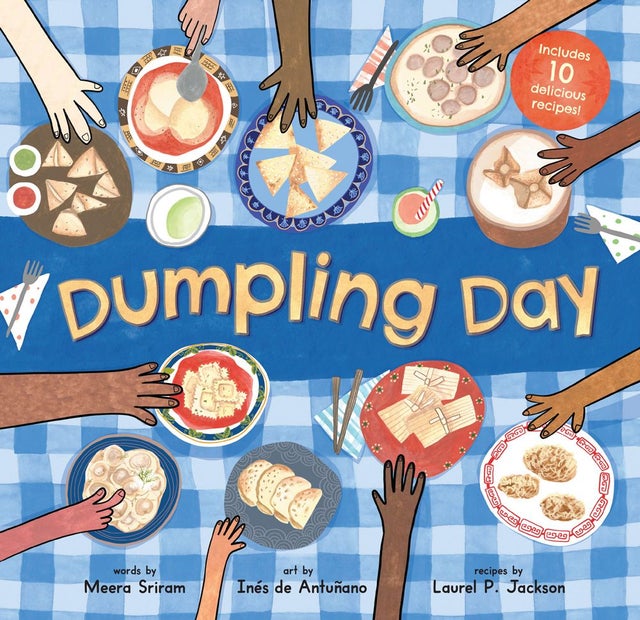 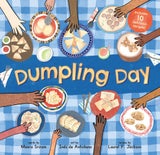 Savor a rhyming celebration of one of the world’s most universal foods! Readers follow ten diverse families as they cook dumplings inside their homes in preparation for a neighborhood potluck. Dumplings are added to plates one by one, encouraging children to count with each new addition. Authentic recipes for all the dumplings and a map showing their regions of origin are included in the endnotes.

Kids in the Kitchen: New and Recent Books About Cooking and Food, Publishers Weekly, 2021

“The aromas of homemade food sneak their way across an entire multicultural neighborhood as growling bellies wait to be filled with . . . dumplings! Recipes from Nigeria, Syria, China, Russia, Mexico, and more reveal tasty fillings tucked into doughs that are boiled, steamed, fried, and baked. . . . Sriram’s simple rhyming story celebrating the unifying magic of food pairs well with the childlike naïveté of de Antuñano’s inclusive and diverse gouache illustrations” – Kirkus Reviews

“Peppy, rhyming text; cheerful illustrations; and a counting element combine for an enjoyable introduction to 10 types of dumpling from around the world, spanning Nigeria to Russia to Japan . . . Vibrant, folk art style illustrations depict the multicultural families and expand on the inclusive message” – Booklist

“Counting from one to ten dumplings, this culinary celebration visits families preparing for their town’s multicultural “dumpling party.” The folk art–style illustrations bring readers into bustling kitchens; the rhyming text packs a lot of cultural specificity into two lines” – The Horn Book Guide

Meera Sriram grew up in India and moved to the U.S in 1999. An engineer in the past, she now enjoys writing, leading early literacy programs and advocating for diverse bookshelves. Meera is the author of The Yellow Suitcase and has also co-authored several books in India. She believes in the transformative power of stories and likes to write about people, places and experiences less visible in children's literature.

Inés de Antuñano is a Mexican illustrator and graphic designer. Her work is influenced by the beauty of urban chaos as well as arts and crafts, and has been published in several illustration catalogs and books in Mexico. Inés is inspired by her four-year-old son, who helps her rediscover the world around her with all the amazing things he says. Her artwork is created with gouache on paper and digital techniques.