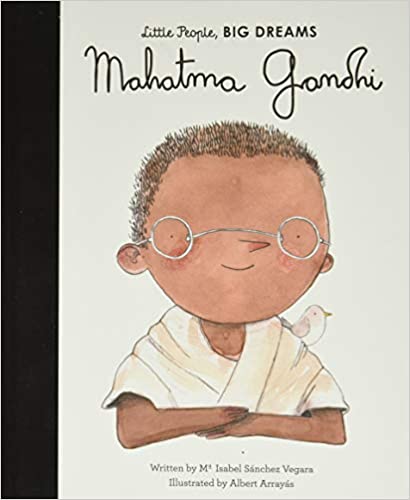 Meet Mahatma Gandhi, a champion of peace and human rights.

As a young teenager in India, Gandhi led a rebellious life and went against his parents' values. But as a young man, he started to form beliefs of his own that harked back to the Hindu principles of his childhood. Gandhi began to dream of unity for all peoples and religions. Inspired by this idea, he led peaceful protests to free India from British rule and unite the country—ending violence and unfair treatment. His bravery and free-thinking made him one of the most iconic people of peace in the world, known as 'Mahatma' meaning 'great soul'.

Maria Isabel Sánchez Vegara, born in Barcelona, Spain, is a writer and creative director in constant search of new concepts for children's books. Working for more than fifteen years for clients in top advertising agencies, her books combine creativity with learning, aiming to establish a new and fresh relationship between children and pop culture.